Come one, come all! To recognize the scholarship and research being conducted by undergraduate students on the Mizzou campus, as well as the faculty who take great care and time to mentor them, Undergraduate Research Week at Mizzou highlights and showcases many of the projects and works being conducted on the MU campus.

Events include the Humanities Symposium sponsored by the Department of Women’s and Gender Studies, a display at the Columbia Art League of the winning projects from the 2021 Visual Art & Design Showcase and a closing ceremony at which awards will be given for Faculty Mentor of the Year and other distinguished honors. Join us!

If you would have asked a five-year-old Anna Sullentrup what she “wanted to be” as she darted around her grandparents’ scenic farm in Krakow, Missouri, she surely would’ve piped “veterinarian.” That might still be her ultimate path. But 15 years later, Sullentrup’s undergraduate research at Mizzou has presented that Franklin County girl with welcome options. 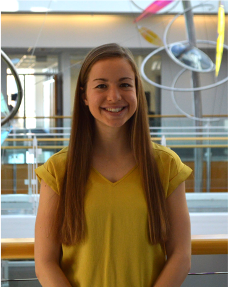 Anna Sullentrup, a junior from Washington, Missouri, is a biochemistry major.

“Now I’m not sure if I want to pursue veterinary medicine, medicine or research,” says Sullentrup, who studies the effects of medications on cell metabolism in arthritis patients. “I love the collaborative experience in the research laboratory. I had no idea that I would meet friends, mentors, instructors — so many people who would shape so many things about my college experience.”

Sullentrup, who is also a student-athlete on the Mizzou cross-country team, sees several parallels between distance running and research.

“Discipline is a huge part of both, knowing that you have days off but you have to put in consistent work  going to the lab and making sure your data is organized,” Sullentrup says. “My high school coach told our parents the reason cross country teams had the highest grades is that after you run eight miles you don’t mind doing your homework.”

Stoker, a 2018 recipient of the MU Faculty Mentor of the Year Award and the associate director of the Thompson Laboratory for Regenerative Orthopaedics, says both events give the students an opportunity to hone their presentation skills while demanding a comprehensive understanding of their material. 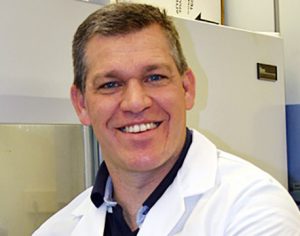 To his undergraduate research students, Aaron Stoker is known as “lab dad” because of his unwavering support and encouragement.

UM System Undergraduate Research Day, although typically an in-person event at the Missouri State Capitol, has been expanded to a week and made available online to legislators. The Undergraduate Research and Creative Achievements Forum is hosted online by MU Libraries and allows for interaction and critical input from online visitors.

“The benefit of an event like this is to help lawmakers better understand that the money they invest in Mizzou translates to students learning more and becoming good scientists for the greater good,” Stoker says. “These forums give students an opportunity to gain confidence and get feedback on how clearly they can communicate their findings.”

Complex scientific topics are nothing new to sophomore biological sciences major Elise Baumann, the daughter of a pediatrician and orthopedic surgeon in Hannibal, Missouri. With two brothers in med school at Mizzou, medical conversations at the dinner table were commonplace. 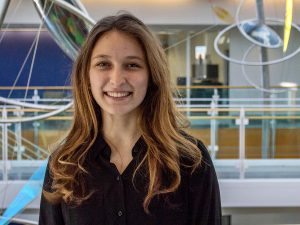 Elise Baumann comes from a family of doctors in Hannibal, Missouri.

“I had many opportunities to see them work and watch my dad do surgeries,” says Baumann, who investigates intervertebral disc degeneration. “At Mizzou, working with teams that work on different things means I get to hear about their research too, not just what I’m focused on. I have learned so much more than I would in class.”

Ally Sivapiromrat, a sophomore biology and economics major from O’Fallon, Missouri, had already won an award at the Annual Biomedical Research Conference for Minority Students (ABRCMS) for her research on intervertebral disc inflammation. 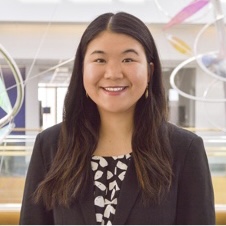 Ally Sivapiromrat won an award for her presentation at the most recent Annual Biomedical Research Conference for Minority Students.

“I would greatly encourage all incoming students to get involved with research,”  Sivapiromrat says. “It has been my favorite aspect of my undergraduate career. My favorite days involve going directly from biology or chemistry class to the research lab, dissecting samples and learning more about intervertebral disc degeneration with samples right in front of my eyes.”

The undergraduate research experience is a highly productive two-way street, according to Stoker.

“My students teach me how poorly I communicate sometimes,” says Stoker, laughing. “I have to slow myself down and realize that leaps of logic that I make are not leaps of logic other people might make. They teach me how to say things more succinctly and in a way that is understandable to a broader audience.

“Anna, Elise and Ally are all amazing student researchers who are very dedicated and hard working,” Stoker adds. “They are all leaders within their respective teams, and they are all fantastic presenters.”