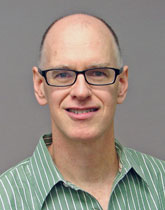 The interaction with students is what keeps Professor Donald Burke excited about being a research mentor.

“There is tremendous motivation to not let the students down,” Burke says. “It stimulates me quite a bit. They have a lot of energy. I don’t have to keep up with them all the time, I just have to soak up their enthusiasm and offer them what I can.”

Burke, a professor of Molecular Microbiology and Immunology and a joint professor of Biochemistry and Biological Engineering, was named an Outstanding Undergraduate Research Mentor Award for 2016 after being nominated by several of the students he has mentored.

“It is very special to have that recognition from the people that you really care about,” Burke says. “You try to craft the experience for them, the experiments they are going to do, the interactions you have and the feedback you give. To have them turn around and say, ‘you know, some of that worked,’ that’s a special feeling.”

In one nomination letter, a student describes being inspired following just one meeting with Burke. “I found that Dr. Burke has an infectious ambition,” the letter reads. “Dr. Burke shaped my career in research. He showed me the capabilities I have to succeed in research.”

Another student nominator describes Burke’s interactions with students. “For Dr. Burke, it was critical that the undergraduate students in the lab were growing in their knowledge and comprehension of the lab’s research projects as well as the daily operations of working in a research lab.”

Burke enjoys seeing the joy on students’ faces as they start to solve problems or realize the things they are doing at the bench captures some of the ideas that they learned in their lab or in the classroom.

“For some students, what is special for them is the discovery itself,” Burke says. “For others, it’s being able to put their hands on these projects and make discoveries and see data materialize.”