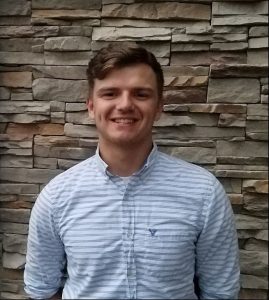 Mathew Sexton, a junior from Columbia, Missouri, is majoring in health sciences on the pre-med track and is minoring in psychology. This summer, he is working with Adam Schrum, associate professor of molecular microbiology and immunology, surgery and bioengineering.

“I have been assessing the functions of the immune system, trying to discover what it does and why it does it,” Sexton says. “The research is important because there are still a lot of things that we do not know about the immune system.”

Sexton is a member of the Initiative for Maximizing Student Diversity (IMSD) EXPRESS program, which received a grant from the National Institute of Health to fund his summer research internship.

“Coming to Mizzou, just down the road from home, has really opened my eyes to the research opportunities that are available here,” Sexton says. “Mizzou is a great place to be if you are motivated and want to pursue things because there are a lot of things to pursue here.”

When Sexton was in high school, he hurt his arm while wrestling and was told that he would never have full range of motion in his arm. After receiving treatment at the Columbia Orthopedic Group, his arm regained mobility and healed over time. After college, he wants to go to medical school at MU so that he can become an orthopedic surgeon.

“After what happened with my arm in high school, I think being an orthopedic spinal surgeon would be cool because I could help others just like the people that helped me,” he says.

Sexton volunteers with Big Brothers Big Sisters of America and likes to play video games. He is also a volunteer firefighter with Boone County and lives at the fire station. He is on call for 40-hours a week, assisting with fires throughout the county.