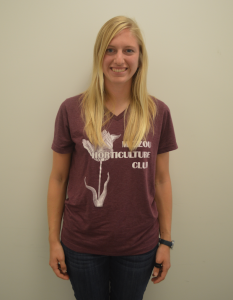 Senior Elizabeth Prenger grew up on a farm in the small town of St. Thomas, Missouri. She chose to leave home and come to Mizzou because of its diversity of programs, as she was not quite sure what she wanted to do. However, her upbringing on a farm made her realize that she was interested in agriculture. “I had the idea that I wanted to go into something agriculture-related, and I always liked plants, too. So I looked more into it and thought about doing something with research in Plant Sciences,” Prenger said.

She eventually declared her major as Plant Sciences with an emphasis in Crop Management and Horticulture. As far as undergraduate research, Prenger stumbled upon the opportunity by accident. “I saw a flyer in the basement of the Ag Building outside my adviser’s door and wanted some lab experience, so I applied,” Prenger said. Soon after, during the second semester of her freshman year, she began work as a lab assistant in Dr. Melissa Mitchum’s nematology lab.

“I started out just helping post-docs mostly, with things like harvesting seed, or I would help with mixing up gels and that kind of thing. And then eventually I moved on to performing PCR [polymerase chain reaction] experiments and DNA extractions, as I got more comfortable with lab procedures,” Prenger said. Around September of her sophomore year, Dr. Mitchum encouraged Prenger to apply for funding from the Monsanto Undergraduate Research Fellowship (MURF).

“If I hadn’t started actually working and getting involved with it early on, I wouldn’t have had the chances to build the experiences that I’ve had.”

After she received the fellowship, she spent the rest of that year working on an independent soybean project, in which the goal was to “eventually do a mutation mapping and hopefully find new genes that play a role in resistance to soybean cyst nematode.” Although she moved on from that lab, they use her work to continue the experiment, which has a publication in progress scheduled to come out later this fall.

Prenger began work in the on-campus Soybean Breeding Program with Dr. Andrew Scaboo her junior year, and continues to work there today, mostly helping grad students with their projects and with crossing soybeans. This past summer, Prenger interned in production research for Monsanto. “I had a couple of projects that I was involved in, like RHS (Round-up Hybridization System) in corn, and I did a lot of looking at inbreds and coordinating treatments for that, and I did a lot of data collection,” Prenger said.

With plenty of research experience on her resume, she decided to apply for the Golden Opportunity Scholarship, which provides funding for its recipients to attend national ASA (American Society of Agronomy) meeting in Minneapolis in November. She received the scholarship, and is excited to make connections on the trip. “They’ll give us a mentor who can give us an idea on what grad school will be like and can introduce us to other professionals that have similar careers to what we’re interested in. It’s mainly for those interested in grad school, but it’s a good opportunity to network,” Prenger said.

Prenger also hopes that the trip will provide her with some leads on where to attend graduate school. “I don’t know exactly where I want to go, so it’d be a good opportunity to talk topeople about what kind of projects they’re involved in and if they have funding for a grad student,” Prenger said. She’s currently in the process of applying to North Carolina State, in hopes of getting into their plant breeding program.

“My experiences in research and at Mizzou in general have opened my eyes to the opportunities that are out there if I’m willing to step out of my comfort zone.”

Prenger believes that getting involved in research as a first-year student has helped her get to where she is today. “I think if I hadn’t started actually working and getting involved with it early on, I wouldn’t have had the chances to build the experiences that I’ve had,” Prenger said. She credits the connections she made during her first year in a lab as being the reason that she’s had experiences like MURF, the Monsanto internship, her job in the Soybean Breeding Program, and GO Scholars. “A lot of what I have done has spiraled off that experience,” Prenger said.

She plans to earn a master’s degree and then hopes to influence the way people approach plant research. “I’d like to someday be involved in a role where I get to help make important decisions about which plants to advance for improvement, like in a breeding program or something like that,” Prenger said.

After gaining so much undergraduate research experience over the last few years, Prenger hopes that other students will take chances early on and enjoy the benefits as she did. “I grew up in a very small town. I was very much a homebody coming into college. But my experiences in research and at Mizzou in general have opened my eyes to the opportunities that are out there if I’m willing to step out of my comfort zone,” Prenger said.

She also believes that her research experience has helped her develop as a person, and encourages other students to take the first step by stepping out of their comfort zones as well. “I think if other students take the chance to do that, they can learn a lot about themselves.”