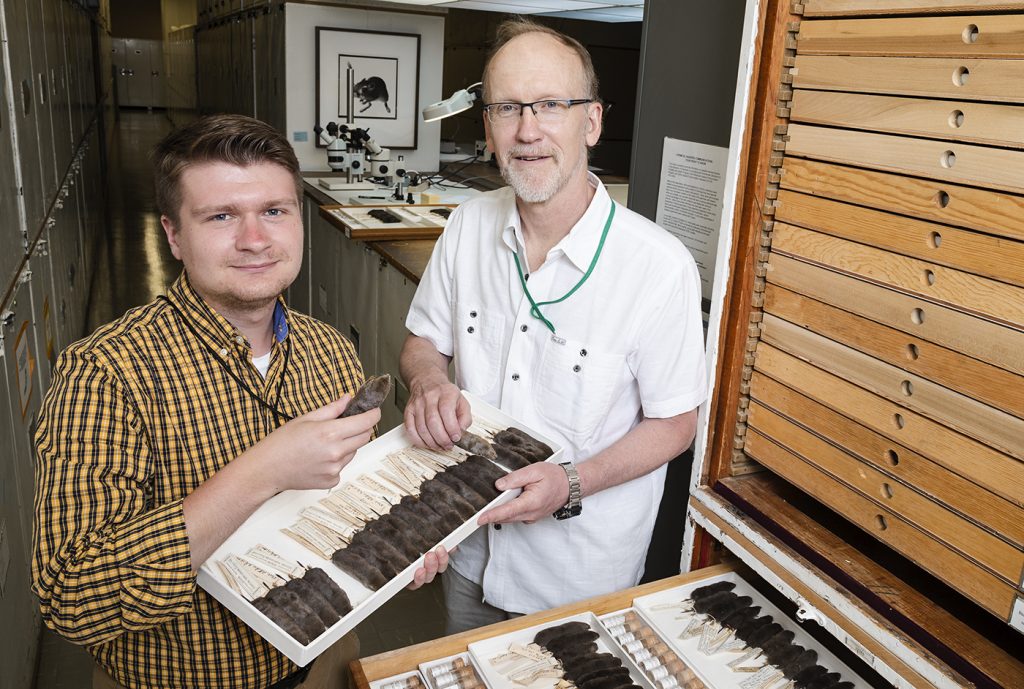 Alec Wilken conducted research on the structure and function of the limbs of the shrew with Neal Woodman, Curator, Division of Mammals, Department of Vertebrate Zoology, National Museum of Natural History, Smithsonian Institution.

Biological sciences major Alec Wilken’s research at Mizzou focuses on lizard skulls. Last summer, Wilken took the knowledge he gained through his studies at MU to Washington, D.C., and into the labs of the Smithsonian—the world’s largest museum and research complex—to study the postcranial anatomy of mammals.

As a member of the 2018 National History Research Experiences for Undergraduates internship program at the Smithsonian Institution’s National Museum of Natural History, Wilken participated in a 10-week inquiry-based research experience. He was one of 18 students selected from hundreds of applicants, earning his place on a project under the supervision of Smithsonian-based scientist Neal Woodman.

“I was delighted to find that Alec was extremely well-prepared by his classwork and previous research experiences at the University of Missouri,” Woodman says. “He is a mature, intelligent, highly-motivated student with a strong interest in evolutionary biology and morphology. He kept me on my toes all summer.”

Wilken, a native of Sedalia, Missouri, worked with Woodman on two related projects, primarily researching short-tailed shrews of the genus Blarina. He studied skeletal variations of four forms of shrews and used the data to predict the relative digging abilities of each. This process involved taking x-rays and photographs of shrew bones and measurements of the x-rays, and applying his findings to the lever mechanics of the bones.

“It was a very different experience than my lab here (at MU),” Wilken says. “Here I study lizard skulls, so I’m looking at reptiles and cranial anatomy, whereas over there, I was studying everything but the skull. It was kind of the polar opposite of what I’ve been doing.”

Wilken’s work over the summer opened his eyes to shrews as a great model organism for other studies. One unique aspect of shrew skeletons, he says, is their high amount of skeletal modifications.

Alec Wilken demonstrates the differences in animal jaw bones during his time at the Smithsonian.

“Something I’m actually really interested in is studying their skulls,” Wilken says. “Their skulls decrease the braincase volume in the winter and regrow it in the spring, so that has profound implications for bone biology.”

Wilken’s discoveries at the Smithsonian didn’t end with shrew anatomy; he explored Theodore Roosevelt’s notes, held a meteorite older than the earth and met Gal Gadot on the set of Wonder Woman 1984.

Back at MU, Wilken continues his research of lizard skulls, while also serving as an Undergraduate Research Ambassador, a position in which he increases awareness of the various research opportunities available across all disciplines on campus. His mentor at MU is Casey Holliday, an associate professor of pathology and anatomical sciences.

Wilken hopes to continue working with cranial anatomy and is looking into PhD programs to learn more about how lizard skulls function.