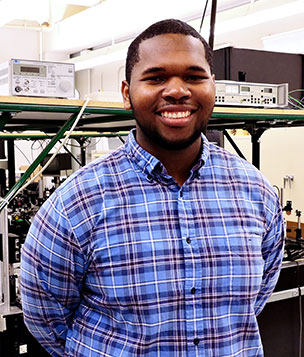 As a physics major, MU sophomore Romanus Hutchins knows it can be challenging to fascinate people with formulas and engage them with equations.

“You can make science sound really interesting,” Hutchins says, “and you can also make it sound really boring.”

Through his experience as an Undergraduate Research Ambassador, Hutchins has learned how to speak about science in a compelling way as he gives presentations to Freshman Interest Groups, classes and student organizations about getting involved in undergraduate research.

“A big part of research is public speaking,” Hutchins says. “You have to communicate your ideas well enough so people can understand them. As an Undergraduate Research Ambassador, I’ve been able to sharpen my skills as a communicator.”

Michael Cohen, assistant director of the Office of Undergraduate Research, encouraged Hutchins to become an ambassador when he recognized Hutchins’ enthusiasm for and motivation to conduct research.

Cohen and Hutchins believe sound speaking skills and captivating presentations play a critical role in inspiring MU students to conduct their own research.

Hutchins started conducting research his freshman year. He studies how a laser that was first optically observed in 2007 interacts with biological subjects such as human and animal tissue. He believes the laser could be a useful tool in detecting cancer cells.

In May of 2015, Hutchins presented his research at the Conference on Lasers and Electro-Optics (CLEO) meeting in San Jose, California. CLEO is the premier international forum for scientific and technical optics. Attendees, including Hutchins, had the opportunity to share research and ideas and to network with industry leaders.

On March 15, Hutchins will use his speaking experience as he presents his research at the Missouri State Capitol in Jefferson City. He will be part of a group of undergraduate researchers that will share research with legislators and members of the general public as part of University of Missouri Undergraduate Research Day at the Capitol.

“I’ve made it to a point where I could talk to anyone about my research,” Hutchins says. “I know these are busy people, and some of them may not be too interested in what I have to say, but part of my job is to help people understand my research and to make it interesting.”

Cohen says it is important for Hutchins and other students to share their research at the Capitol. The presentations help legislators understand the work that undergraduates conduct and the broader implications of their research.

“Our undergraduates’ participation in this event provides lawmakers with a strong sense of Mizzou’s focus on research and development, and how this focus is ingrained in our undergraduates and our graduate students and faculty,” Cohen says.

Along with being an Undergraduate Research Ambassador, Hutchins participates in the Exposure to Research for Science Students (EXPRESS) Program, which is an Initiative for Maximizing Student Development (IMSD) program designed to encourage underrepresented minority students to pursue a career in biomedical research.

“There is a need for diversity in science,” Hutchins says. “There are always different approaches to different problems, and people with different backgrounds and experiences approach problems differently.”

Hutchins and other participants attend weekly professional development workshops and receive funding to gain research experience with a faculty mentor in the science department of their choosing.

“I always tell my students that we’re not Match.com,” Brian Booton, IMSD EXPRESS Program Coordinator, says. “We don’t match students with a research lab. We give them tools and resources to identify research groups that align with their interests and assist with the interviewing process.”

Within EXPRESS, Hutchins is founder and chair of the STEM Community Outreach Initiatives Committee. He and other members of the committee visit Lange Middle School in Columbia once a month to conduct an after-school program for students. Committee members work with MU faculty to create lesson plans and then guide the middle school students through a series of science experiments.

“Romanus has shown tremendous leadership in not only working with school administrators and science teachers to secure volunteer sites, but also in his ability to rally his peers to participate in a meaningful mentoring activity,” Booton says.

Both Cohen and Booton agree that Hutchins’ leadership and communication skills make him an asset to the programs in which he is involved. “Romanus is a natural-born leader who works to constantly improve himself and develop the people with whom he interacts,” Cohen says.