Rebecca Shyu knew she would end up at Mizzou, but she initially thought it would be as a doctor.

Going into high school, that was the goal. A Columbia “townie” with both parents working at Mizzou, she visited campus often and knew it would be her academic home. But when a research internship presented itself, she pivoted from medicine to computer science and engineering. 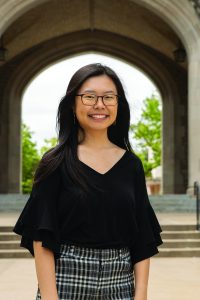 “Computer science has so many different applications in everyday life,” Shyu says. “I really liked the health aspect of applying computer science methods to looking for new discoveries.”

That interest in research led her to the Department of Electrical Engineering and Computer Science at Mizzou, where she’s been doing research in the medical field for the past three years. Covering topics as varied as liver cancer and rural health care, Shyu’s research has always been central to her studies.

The outstanding senior goes well beyond research though. Shyu is also interested in policy, which led her to mentor Ateev Mehrotra at Harvard Medical School, who has worked on congressional testimonies.

Enter Posters On the Hill, a prestigious event that celebrates the impressive work of national students and supports messages about the importance of undergraduate research at the federal level. Selected from hundreds of applicants, Shyu is one of 60 student presenters who have been selected to showcase their work to U.S. legislators. Like so many events over the past year-plus, the event is entirely online in 2021 due to the pandemic.

“I would love to be involved in health policy work, like being able to present my research to policy makers to better inform them,” says Shyu, who is also one of two Goldwater Scholars at Mizzou in 2021. “I think it’s incredible because it gives you so much more reach and impact on society and your community.”

Shyu’s success wouldn’t have been possible without her support system. Her family has endorsed whatever field she decided to land in. Lucky for her father, a computer science professor at Mizzou, she ended up in one of his classes. But they’ve always encouraged her to pursue whatever she wants.

“My parents have always supported me, especially going into STEM as a woman,” Shyu says. “I’m really proud of my entire family and everything they’ve done.”

Another big support for Shyu is her mentor Iris Zachary, assistant research professor and director of the Missouri Cancer Registry and Research Center, who has worked on research projects with Shyu since her freshman year. These past two months have been a whirlwind of awards for Shyu, and Zachary is excited to see where Shyu’s passions take her next. 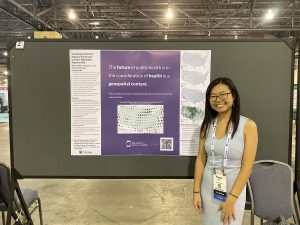 Rebecca Shyu has centered much of her Mizzou experience around undergraduate research.

“Her interest for policy is a thread, so it really was there from the beginning and she has maintained that interest,” Zachary says. “She will go very far and she will do very well wherever she goes.”

Shyu has been involved in many organizations across campus, including the MU Homecoming committee, Society of Women Engineers, Upsilon Pi Epsilon (honor society for computer science), and the MU Office of Undergraduate Research’s ambassador program.

“Shoot for every opportunity regardless of what you think the outcome might be,” Shyu says. “I’ve really adopted that mentality in college, and it’s brought me so many opportunities I never thought I would get.”

Shyu hopes to pursue a PhD after graduation and hopes to be involved in policy making regarding public health. She also wants to be a research professor. Wherever her research takes her, she will bring along her trademark enthusiasm and excitement.

“I’ve been able to do a lot at Mizzou, and I’m really thankful for it,” Shyu says. “Mizzou is a place that cultivates that environment where you’re proud to be a Missouri Tiger while also wanting to make your community a better place.”