Tyler Reeder is one of 33 students participating in the Visual Art & Design Showcase, which is entirely online in 2021. Click the button below the site to see Reeder’s work, view the comprehensive gallery, watch video artist statements and leave comments.

Tyler Reeder was thrilled when he heard his hard work had paid off and would appear in the 2021 Visual Arts & Design Showcase. As a senior in the MU Honors College with little free time, it took determination to create his collection “NEUTROIS” which focuses on escaping binary lines. 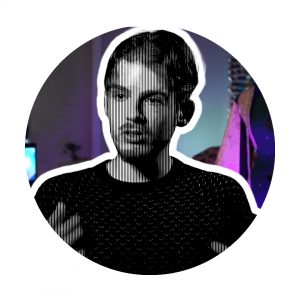 Tyler Reeder is one of 33 students participating in the Visual Art & Design Showcase, which is entirely online in 2021.

“I wanted to go more experimental, focusing on gender and what that means now,” Reeder says.

He wants to give others an understanding of the importance terms such a “nonbinary” and “androgyny” play in our lives. When people look at his designs, he wants them to think: “This is not a male shirt, this is a shirt that looks good,” Reeder says.

A lifetime of cultural exploration shines through his work. Born in San Diego to a military family, Reeder moved around frequently but became who he is today in a hub of multiculturalism.

“My development as a person was mostly in the Washington, D.C., area,” Reeder says. “It influenced who I am now.”

Home with his mother while his father served in the military, Reeder took opportunities to learn Chinese and Japanese, explore different cultures and study the creative arts.

“I’m quite different from my family because I looked outward for cultural exposure,” Reeder says.

He was unsure if he would continue that exploration after high school.

“I didn’t think I was going to college,” Reeder says.

After retiring from the military, his father took a teaching position at Longview Community College in Lee’s Summit, Missouri, where Reeder was able to get his associate’s degree in the arts. Through his community outreach with the National Honor Society, Reeder learned more about the University of Missouri and joined its Honors College where he now majors in textile and apparel management with an emphasis in product development.

Nearing the end of his last semester, Reeder hopes to go back to the region that built him — the east coast — and settle into Washington, D.C., or New York. His father worked with computers in the military, so Reeder wants to make his own path in digital design and fashion.

“I came to Mizzou for a once-in-a-lifetime chance,” Reeder says.