Rachel Conrad is one of 33 students participating in the Visual Art & Design Showcase, which is entirely online in 2021. Click the button below the site to see Conrad’s work, view the comprehensive gallery, watch video artist statements and leave comments.

Rachel Conrad has been passionate about drawing, art and film since she was a child. “I love animated films so much that until I was 10, I refused to watch any live action” says Conrad. She watched The Lion King almost every day for a couple of years. 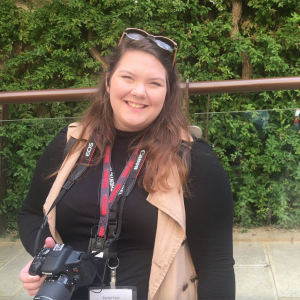 Artist and videographer Rachel Conrad, one of 33 participants in the 2021 Visual Art & Design Showcase, is a double major in digital storytelling and art.

Conrad (Palmyra, Missouri) is a senior at the University of Missouri double majoring in digital storytelling and art. Using Photoshop, she created a video piece based on her childhood fear of volcanoes for the Visual Art & Design Showcase — which is entirely online in 2021.

“It was the first time I had ever animated, so it was a lot of fun to make but also kind of challenging getting into that new trade,” she says.

Conrad loves to listen to music, play video games and watch movies. She also plays the drums. “I’ve been drumming for about 12 years, which is a weird thing to look back on because it makes me feel really old” Conrad says.

Conrad comes from a long line of Mizzou graduates. Her parents, grandparents and brother are alumni. “We are a big Mizzou family,” she says.

Conrad is currently looking for various jobs in animation to begin after graduation. She is skilled in 2D and 3D animation, but she prefers 2D.

Conrad has lived at the Christian Campus House all four years of college which has led to her involvement in various ministries. She works mostly for the media team where she creates promotional videos for events. Conrad is also a house mom, similar to an RA. “I like to tell people that I have 17 daughters” says Conrad, laughing.

Conrad is ecstatic that her piece was selected for VADS.

“It’s reassuring to me that others enjoy the work I do. It’s a nice reassurance that ‘okay, I can do this,’” she says.