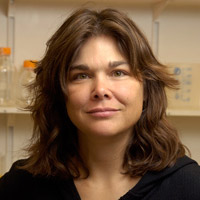 Once in a while, there’s a moment when students finish an experiment or an analysis and realize that they are the only person in the world who knows that particular thing. It’s that moment that D Cornelison enjoys the most in her role as a faculty mentor.

“The excitement of it makes all the long hours and times when things didn’t work not matter anymore,” she says.

The hours and hard work have also paid off for Cornelison, who was named a 2015 Outstanding Undergraduate Research Mentor.

A student of Cornelison calls her “one of the best mentors I could have asked for.” The mentee went on to say that Cornelison “enjoys her career and it comes off in a positive and inspirational way.”

Another student describes a supportive environment in Cornelison’s lab where students engage in research and scholarly work. “When I joined the lab, Dr. Cornelison did not immediately assign me to a project to work on,” the student says. “Instead, she nurtured my curiosity and demonstrated she valued my interests by allowing me to spend the first couple weeks rotating with graduate students and talking with undergraduates to decide which project I found most intellectually stimulating.”

Cornelison credits her mentors for getting her where she is today.

“I probably wouldn’t be in science now if not for my own undergraduate research experience,” Cornelison says. “In a way my mentoring is like giving back to my own mentors.”

The Cornelison lab studies development, regeneration and disease in mammalian skeletal muscle, with a focus on muscle stem cells, called satellite cells, which are responsible for all growth, repair and regenerations in the tissue throughout life.

“Working in a lab demystifies science, turning it from what can seem like a strange, esoteric process done by ‘smart’ people into something that can be an ongoing part of their academic life—if they want—or at least a stimulating, enjoyable, creative group effort,” Cornelison says. “Opening that door and introducing undergraduates to what it’s really like to do science is, I think, one of the most important things we do.”